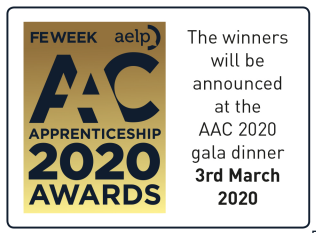 West London College has been nominated for the SEND Apprenticeship Champion Award at the Annual Apprenticeship Awards, it was revealed in FE Week today (Friday, 13 December). The judging panel has spent the last month reviewing applications and were impressed by the high calibre of applications received.

The awards were first launched in 2017 by FE Week and the Association of Education and Learning Providers (AELP), and last year several new categories were introduced, including an award to recognise employers and providers’ work with SEND apprentices and to increase diversity.

David Warnes, WLC Deputy Principal said: “West London College is fully committed to providing exceptional career opportunities for learners with special educational needs and disabilities. We are very proud that this has been recognised by nominating us to win the SEND Apprenticeship Champion Award.

The shortlisted finalists will be invited to attend a special celebratory reception at the Houses of Parliament hosted by education select committee chair Robert Halfon, on February 5. The  winners will be announced at an awards ceremony during the Annual Apprenticeship Conference gala dinner 3 March at the ICC in Birmingham.

If you are interested in an inclusive learning course at West London College, please browse our website using this link  or call us on 020 8741 1688